Unanimously dubbed as one of Japan’s best romance-drama series in recent years, YOUR LIE IN APRIL will be making its live-action debut on the cinematic screen much to the delight of anime fans.

Your Lie in April tells the inspiring and heart-breaking story of piano prodigy Kosei Arima. Growing up, Arima has won numerous piano competitions while under the strict watch of his mother. Labelled as a ‘human metronome’ who eventually loses the ability to hear the sound of his piano, Arima goes spiralling downwards after the death of his mother. Since then, life has been quite ordinary for Arima — no sign of life, colour or spark. This all changes when he meets an aspiring violinist Kaori Miyazono on one Spring day. From the moment he saw her, Kosei Arima knew there was something special about her as he slowly warms to the idea of playing the piano again.

Slated for September release, we are absolutely excited for this movie. Not only is Your Lie in April one of our favourite anime series but we personally believe that a live-action film could do no wrong in terms of capturing the music and essence of the story.

Fronted by two very popular stars of today’s generation, we are happy that Kento Yamazaki and Suzu Hirose will be playing Arima and Miyazono respectively. For those who don’t know, Kento will be portraying the male lead in other live-action movies including Orange (2015), Wolf Girl and Black Prince (2016) and One Week Friends (2017). And if you haven’t already guessed yet from her innocent smile, you may recognise Hirose as Chihaya from the upcoming Chihayafuru movies. 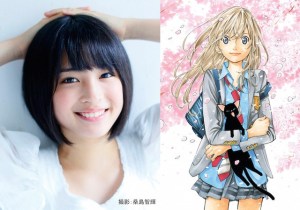 Directed by Takehiko Shinjo, it has been reported that both Yamazaki and Hirose have been given piano and violin lessons prior the start of filming. We cannot help but wonder — How is the story going to be translated via the live-action medium? Is this film adaptation going to be as mesmerising and perfect like the anime itself? Guess we’ll find out soon!

What are your first impressions of the live-action film so far? Let us know in the comments below!