In a world that is consumed by idol anime music comes this original Netflix series that will have you yearning for more anime musicals. But with such expectations riding on the series, did LOST SONG hit the right notes with the audience?

With a passion for singing, Rin is an energetic countryside girl who yearns to join the Capital’s Royal Orchestra and sing with them. Living with her younger brother Al, older sister Mel, and grandfather Talgia in a reclusive village, it turns out that Rin has the ability to sing Spirit Songs — songs filled with hope and healing powers. 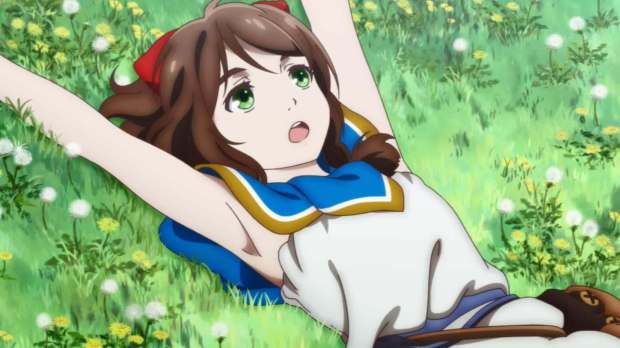 But when the Capital soldiers discover her skill, her family is immediately thrown into danger and Rin is determined to go to the Capital more than ever. Over at the Capital, the beloved songstress Finis is admired by everyone. With war increasing on the foreground, Finis is coerced into healing soldiers, and eventually forced to use her singing powers as a weapon of war. Song after song, Finis’s songs slowly cuts her lifespan. What does the future lie ahead for both Rin and Finis?

Lost Song is set up as your typical adventure-fantasy anime — the characters, setting, conflict, and a journey that the main character must embark on. The fact that it is set in a fantasy-medieval setting quickly excites us as we haven’t had such feels since The Ancient Magus Bride and Snow White with Red Hair.

As we dive into the story, the audience begins to wonder whether Lost Song was going to be a musical or not — you know, the one where the characters break into random song as part of the storytelling. After all, it is not every day that we see an anime musical! Luckily, after watching a few cringe-worthy musical moments, we are very thankful that the Lost Song didn’t end up being a full-on musical.

With its saturated setting and colours, young protagonists, and cliche fantasy characters (the evil Prince Rudo, the noble Knight Henry and Finis the Princess); Lost Song exudes a happy-go-lucky story that is aimed at a younger audience. This vibrant cutesy nature may seem all fun and games at first, but Lost Song soon hits a dud note when the story becomes stale by the end of episode 4.

With war on the rise and Prince Rudo finally hatching his evil plans, we see Lost Song doing a 180° by implementing dark themes that will shock the audience.

Nowadays, contemporary anime shows are always trying to be original by employing plot twists with the intentions of triggering a reaction from the audience. Just when we thought Lost Song was travelling towards what was going to be a highly predictable climactic finale, we absolutely thought wrong.

Lost Song‘s plot twist comes out of nowhere, and it came at a critical time where it really altered the story’s course of direction. Unfortunately, this element of surprise didn’t last long. Rather than giving the story the much-needed oomph to bring everything together, the delivery of the plot twist made the story convoluted as it sped its way towards the contrived finale.

Overall: LOST SONG is an anime musical with so much potential that failed to deliver. With its commendable dark themes throughout the story, Lost Song should have been produced with an older target market in mind.

To our great disappointment, we thought Lost Song was going to be a musical on the same par as Macross Frontier. The operatic songs might be enjoyable to listen but at the end of the day, the songs aren’t memorable.  If you’re after a short series to pass the time, Lost Song is a series that will fleetingly entertain you with its drama and fantasy setting.