Anime romcoms are a huge hit amongst otakus. But with so many romcom series in the market, how on earth does a show distinguish itself? Fear not! Nisekoi rises above its predecessors in true modern style by ridiculing cliches and involving two star-crossed lovers (well, haters) from yakuza families.

Directed by SHAFT’s Akiyuki Shinbo (Puella Magi Madoka Magica, Monogatari), Nisekoi is a romantic harem-comedy based on the manga series by Naoshi Komi.

This 20-episodes series follow teenager Raku Ichijou who is also known as the heir of yakuza faction Shuei-Gumi. Despite his family’s enthusiasm and desire for him to take over the clan one day, Raku wishes to be a normal school student with a standard career.

After a painful encounter with Chitoge Kirisaki the new transfer student, Raku realizes he has lost his pendant which was given to him by his childhood sweetheart with whom he made a promise ten years ago. Forcing Chitoge to help him look for the pendant, they both realise their personalities clash and declare hatred against one another.

Upon returning home, Raku learns that his family has

agreed to settle their feud with another yakuza family ‘Beehive’ in the most bizarre way. In order to maintain peace between the two gangs, the children from both families must pretend to be in a relationship for the next three years. In a fantastic hilarious twist, Raku learns that his girlfriend-to-be is none other than … Chitoge.

As ridiculous as it sounds, this type of story provides great amusement for the audience. Romance mixed with yakuza characters…Why not? However, this proves to be a challenging task as not only does Raku and Chitoge despise each other but Raku also happens to have a crush on schoolmate Kosaki Onodera whom he secretly wishes was his childhood love.

It may sound like a straightforward romcom story, but you will definitely take back your words within a few episodes. Instead of a simple romance story that has some slight setbacks, Nisekoi chooses to go beyond the standard level by over-exaggerating every romcom cliche there is in the show.

Not only is there one love interest, but two, three, four, and potentially more! From the super shy girl (Onodera) to the tsundere (Chitoge), these girls represent typical girls from anime romcoms. All characters are oddly diverse in their own ways, and we love them for being who they are. This goes for our leading man as well as Raku seems to represent the typical male who is slow and oblivious when it comes to love and romantic feelings. 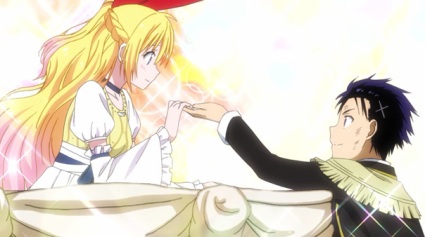 supposedly ‘lovers’ from two feuding families — but with a twist. Just like Jane Austen’s classic Pride and Prejudice, both Raku and Chitoge slowly overcome their pride and differences and begins to realise that they no longer detest each other.

But of course, the story of Nisekoi doesn’t make it easy for these teens. Nisekoi appears to purposely muck around with the audience and the characters in the show, as if it is ridiculing the genre and other romcom series that we have previously encountered.

From Chitoge’s over-protective bodyguard to the existence of multiple keys that may belong to Raku’s infamous pendant, Raku’s quest to find his childhood sweetheart ends up being a little difficult that he thought it would. It’s every girl for herself as each of Raku’s potential sweetheart has some sort of history with a mysterious boy ten years ago…but who on earth is Raku’s childhood sweetheart?

SHAFT is best-known for their avant-garde art direction and cinematography as evident in popular works such as Madoka Magica, Monogatari series and Sasami-san @ Ganbaranai. Although the beloved style is not as noticeable in Nisekoi, we can still see SHAFT’s distinctive style flourished throughout the show from the scenery backdrops to its comedic gags.

What makes Nisekoi different from standard romcoms is

its confidence in delivering various cliche romcom situations in an exaggerated, comedic manner. By using various techniques such as silence and volume; randomised facial expressions; panning/zooming camera angles; and 2D graphics, these techniques not only amplify the situation but also the characters’ personalities and reactions. Whether the scenario is sad, humorous or highly-awkward, SHAFT brings out emotions in an exaggerated raw manner in which viewers will be able to connect with. 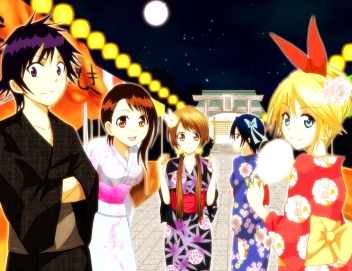 And because of this, it is always fun watching these characters behave the way they do, whether it is visual or verbally presented.

Overall: Nisekoi is the perfect romcom for all viewers out there, and it is definitely the best romcom series of 2014. Despite its ridiculous twists involving Raku’s potential childhood sweetheart and the so-called key to his pendant, Nisekoi is a fresh take on romcoms as it dares to laugh at its own genre. While twenty episode seems more than enough for a story like Nisekoi, the audience is entertained right until the very end. Game on for second season!