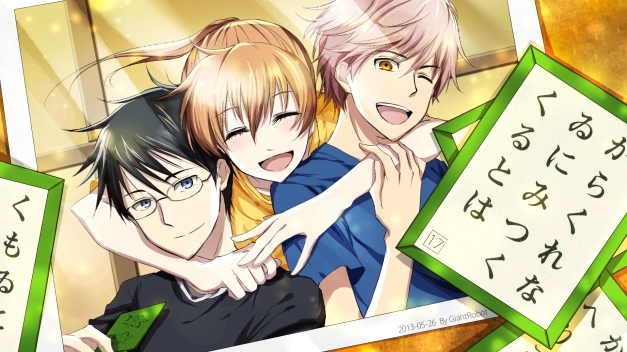 Chihaya Ayase is a girl who has spent most of her life simply supporting her sister in her model career. This changes

when she meets a boy named Arata Wataya, a talented karuta player. After playing a game with Chihaya, Arata believes that she has the potential to become a great karuta player.

As Chihaya takes on a new dream of becoming Japan’s best female karuta player, she is soon separated from her karuta playing friends as they grow up. Now in high school, Chihaya still continues to play karuta in the hopes that she will one day meet her friends again, especially Arata.

In our current world of anime that is occupied by genres such as mecha, fantasy and school dramas, Chihayafuru is one of a kind. In essence, the anime is wonderfully simple, heart-warming, and also remarkably entertaining to watch. Don’t judge the story as one of those ‘card games’ anime just yet! 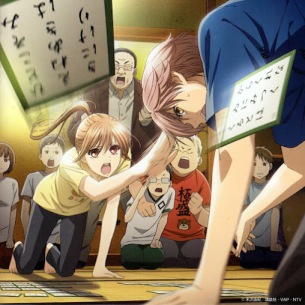 What is unique and refreshing about this story is that it chooses not to complicate its storytelling by putting the spotlight on romance, love triangles and/or life dramas. Instead, the majority of the story focuses on karuta and what is amusing is that you will find yourself heavily drawn to the sport.

Believe it or not, karuta is a very intense and competitive sport to watch, especially if you have never seen or heard of it before. Karuta is made up of 50 cards filled with poetry verses that dates back to the ancient times, with each card telling a story or moral about life. It’s not often that we see literature — in this case, poetry — become part of a sport or being a sport itself.

The way karuta is animated in this anime, and the way it is portrayed from the characters’ perspective

clearly distinguishes itself from other ‘sports’. While it sounds simple and boring, Karuta is certainly something that is magical and mesmerising to watch and before you know it, you’ll be wow-ing over the complexity and brilliance of the game.

One of the things that makes Chihayafuru delightful to watch is its strong emphasis on the characters and their individuality; and also their growth as human beings and as karuta players. Each character has a motive or a touching background story that brings them all together – with karuta, of course, being the common denominator. With such emphasis on bonds, we see relationships developing over the course of time and you will unexpectedly find yourself laughing and crying along with the characters.

Throughout the story, you will see some  heartwarming moments between Chihaya and Arata, and with Taichi as well.  And even though Arata appears little in the story from time to time, his presence is always there. This downplayed love triangle romance between Chihaya, Arata and Taichi surprisingly keeps the story simple and balanced. Such character moments will leave you wanting more whilst being mesmerised by karuta at the same time.

Overall: Chihayafuru is one of those beautifully crafted anime that is a must-watch for your viewing collection. And surprise surprise, the anime recently announced that the second season of the anime will go ahead which will surely excite fans.